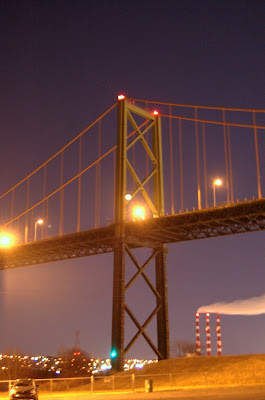 I’ve been spending some time in the last few weeks concentrating on my eco-friendly blog, Lower Footprint. Luckily, this has given me an opportunity to take some interesting photos as well!

These two are from Earth Hour which was last night. Both are shots of the MacKay Bridge during the lights out period. Obviously, the first one is a longer exposure, but both were shot from my car at the Seaview Park parking lot. It was cold out! 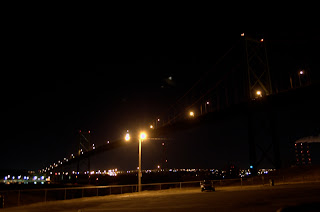 Visit the home of this blog: photopathic.blogspot.com

My buddy Karl is running in the DSU elections this year, so I had the opportunity to do some publicity type photos for his campaign. We wanted to capture the seriousness of the position, yet still make him appear approachable, friendly, and a bit intense. I think we succeeded!

This image will be used on his posters and on his website, karldempseyforvpeducation.webs.com. Hopefully, it will serve him well in the days to come.

This second shot seemed obvious enough. Anyone affiliated with Dalhousie will eventually have their picture taken in front of the clock tower on the Henry Hicks Building. We couldn’t pass on that one. Here, I wanted Karl to appear concerned on behalf of the student body.